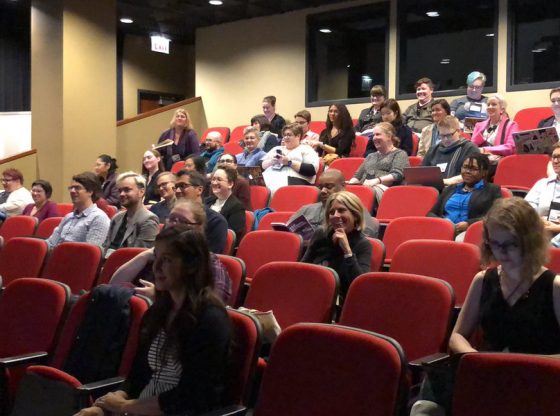 Playback is happy to present more post-conference processing, for all you fan and audience scholars out there who were unable to attend the Fan Studies Network North America 2019 Conference in Chicago this past October! Read on for reviews of panels and keynotes, provided generously by Dr. Paul Booth’s undergraduate students in the DePaul University College of Communication. Click the link to read full papers:

Dr. Lopez describes the diversity within Asian American fandom and how companies have tailored their advertising for them. To strengthen this argument, Dr. Lopez examined marketing campaigns, fan activism, journalism, social media, and blog posts as methodologies for this research. This paper will also explain how this keynote revealed aspects of fan culture such as vulnerability of fans seeing representation on screen, resorting to digital blackface to express their emotions due to lack of representation, and other matters that still need to be address in future studies.

The speech was very relevant to contemporary fandom more than Textual Poachers by Henry Jenkins is, since she has more access to modern examples. The broad amount of fan texts that she referenced to make her points was another thing that I found compelling since the fans of today largely have their hands in many different texts. Although mostly music fandom related, it was easy for me to see how the things she talked about could transfer over to most any other fandom. For this analysis I want to focus on the different types of parody content that Chaney talked about, and how it is analogous to other types of fandoms.

In the panel titled “Marginalized Identities and Fannish World Making,” three scholars from the University of Maryland discussed how black queer women, trans fans, and black cosplayers identified with media texts and participated in fan culture in ways unique to their marginalized identities. The works by Brienne Adams, Damien Hagen, and Alex Thomas each approached their topics from an internal subjectivity…each of these identities were creating their own “World” with a certain inclusivity between fans of similar identities.

These talks were examples of how a text can radically impact how it is seen by its fans, and how that fan reaction can change how others view the text in the future. I think that both of these talks were prime examples of how cult texts have a huge impact on the larger media industry and the discourse that comes from these impacts.

Elise Fong adds to this issue:

I was surprised to see just how varied topics of research could be under these two terms that we’ve been discussing. Georgia Carroll’s study on how a fan’s finances can affect his or her status in a fandom, as well as Taylore Woodhouse’s research on bilingual fans and transnational fandom were two panelists that I particularly understood in relation to our class. Both of these panelists, along with their research, described fandom as hierarchies that work and perform in different ways.

There were three separate presentations within the panel, one of which focused on esports fandom, another that looked at MLB walk-up music, and a third which talked about NFL cheerleaders and their relationship to the NFL. While each of the presenters approached fandom in unique ways, there was some overlap in research techniques and strategies to the ways that we have discussed fan scholarship

To me, one of the greatest joys of D&D lies in the infinite possibilities it presents, but that is because I subscribe very heavily to the idea that anything can be canon if you want it to be, so this scholarship was deeply engaging because it spoke to the different dynamics that can arise when D&D is not just a personal game but also made into a separate media text and therefore has the potential to confine the creative to canon instead.

The Little Mermaid Live-Action Remake as a Case Study for Teaching Industrial Trends in Racial Casting
To Be or Not To Be—Hamlet on Film, Stage, and Filmed Stage