Your Authentic Virtual Idol: Vocaloids and the Database Production Model 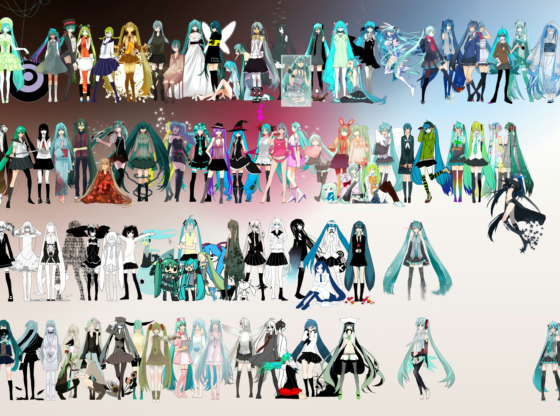 If you have had the chance to frequent the Internet within the last decade or so, chances are, that in some form, you have witnessed or interacted with the figure below. Hatsune Miku is part of a series of Vocaloids, a collection of digital voice bank applications that were developed by Crypton Future Media. Since her initial release in August 2007, her immense success sparked a series of other Vocaloid persona to take the stage with her, all of whom display different identity features and vocal qualities. A particularly unique characteristic of the Vocaloid’s popularity is their heavy dependence on fan labor in order to sustain and support the Vocaloid’s virtual presence. The vast majority of songs made for Vocaloid are original works from the fan producers themselves, and often garner as much popularity as more “official” releases from Crypton Media Company. These fan songs are rendered in a transmedial manner as the same content and characters appear in the Project Diva series (a rhythm game dedicated to Vocaloids), online videos, live virtual idol concerts, fanart, manga, vocal covers, and more. The openness of the Vocaloid fandom and its unique mode of production allows for constant remixing, remaking, and translation, simultaneously across mediums, industries, audiences, and national borders. On March 28, 2012, PBS Idea Channel released a video where the host, Mike Rugnetta, presented a provocative statement, that Hatsune Miku was more “authentic” than the flesh-and-blood celebrity, Lana del Rey. This brief video raised questions of how one can interpret a virtual celebrity within discourses of authenticity; however, instead of pitting Miku against a pre-existing celebrity, I would like to posit that the fan production model itself establishes the Vocaloid figure as an empathy-inducing database. Because of the fan’s heavy influence over the Vocaloids’ expansive body of work, the franchise is able to foster a fan’s perception of authenticity towards the virtual figure and encourage an intimate sense of proximity to the object of affection. While the ability to cross mediums and nations isn’t necessarily new to celebrity, media, and fandom, the affordances of a clearly non-biological entity like Hatsune Miku raises interesting implications of how fans today define authenticity and “liveness,” particularly as advances in sound and performance technology continue to blur the boundaries between the virtual and the physical.

Hatsune Miku is a prime example of the concept of kyara. A shortening of the word, character (kyarakuta), kyara stands for a kind of flattened image-being, whose sole purpose is to represent some kind of corporate or capitalist identity. Unlike a fully developed kyarakuta, which implies at least hints of an internal world, the kyara’s motivations and appeals are all brought to the surface (Annett 2015). They are an image in which all modes of storytelling, messages, and ideologies can be transposed onto, without ever “breaking character.” Kyara often express what Thomas Lamarre coins as “soulful bodies,” which he defines as, “bodies where spiritual, emotional, or psychological qualities appear inscribed on the surface” (Lamarre 201). However, Vocaloids takes the concepts of the “soulful body” a step further, by engaging directly with the “database model” of production, reproduction, and recognition. In Azuma Hiroki’s Otaku: Database Animals, he states that fans and consumers of media texts no longer desire the full character or even desire the full character body, but that a collection of character elements are enough for the viewer to close a circuit of desire (Azuma 2009).

For example, what does one know of Hatsune Miku? She has long teal pigtails and large blue eyes, characteristic of the anime style. She wears thigh high socks, mechanized arm warmers, and a uniform that consists of a tie and a mini skirt. According to Crypton’s profile, Miku is sixteen years old and the quality of her vocals allow her to be effective within certain genres, such as pop, rock, among others. Her name means “the first sound from the future,” in Japanese. This collection of ambiguous characteristics all point to an end result of an affective moe or endearing body, but in reality, the fan or the producer knows next to nothing of what Miku actually is. There are no hints to any kind of internality, physical or otherwise. Perhaps, this is the key to Miku’s widespread success within a media form where terms like “authenticity” often become a point of contention for flesh-and-blood artists. Miku is a clever reflection, which directs those conversations of the authentic straight back to her fans. The ingenuity of the Vocaloid production model is that by being so fan-driven, when one discusses even the nebulous notions of “authenticity” or “liveness,” there is always the implication that when one refers to Miku, in reality, we are also pointing to a fan producer or an artist. By virtue of being a fan and being a part of a larger collective database of creative energy, one can assume that the fan creator is most likely, an average person like you or me. The mystique of creative genius no longer resides at the site of the individual, but through the fostering of the collective database. If Miku is the mouthpiece for a fan’s desires, emotions, and narratives, then the internality of a fan also becomes reflected onto that “soulful body.” In short, Miku is us, or at least the collective desirous us that we see reflected in her enormous repertoire of songs and narratives.

Miku is a database entity, quite literally, in that on a more material basis, she is a collection of pre-recorded Japanese phonemes that can be utilized by any individual who has purchased her program. But on a larger scale, she is a database for a wide variety of songs, illustrated figures, cosplays, and narratives that are produced by people all around the world, who come from vastly different lifestyles, experiences, and express different desires. Because of this production model, Miku has no “canonical” form. In one song, she may sing about the existential ennui expressive of a jaded, postmodern generation. In another song, she is a flustered, lovelorn high school girl going out of her way to catch the attention of the object of her affection. In yet another, Miku is a sadistic serial killer. Sometimes, the figure of Miku is her teal twin-tailed form. Other times, she looks completely unrecognizable from her box art. Regardless, all renditions of Miku are Miku. No one narrative, song, or apperance is “more Miku” than another. This flattening out of the production model reflects the flattening of the kyara, in which everything can be considered canon because of the figure’s lack of internality. She is a flexible database for all her many forms. While these forms may be neatly cut off from one another and sealed into various cells, together, they exist in this collective metaverse that shapes the gestalt that is Miku. While this is not to say that the fan-driven production model is not subject to its own stratified interpretations of what is canonical or quality artistry within the database, this sense that the Vocaloid figure can at once fully embody a singular work and simultaneously transcend it due to the collective database helps to lend a kind of systematic transparency to the production process. If unsavory business practices come to light in regards to a singular fan producer, this does not mean that a listener should disparage Miku, but the person who sustained this iteration of her being. Miku, herself as transcendent database, can remain innocent and authentic. Compared to the exclusive world of commercial music production, where all negotiations seem to occur behind closed doors, the Vocaloids seem so open and candid due to their unique kind of emptiness. Perhaps it is this full commitment to emptiness that allows for a Vocaloid to be perceived as authentic in the first place. They are vessels for the fan to place their own set of ideologies and desires in. Fostered by a more democratic, DIY spirit, perhaps it is this openness that helps the Vocaloids dodge accusations of inauthenticity at a time when the virtual becomes immediately suspect in regards to what is “real,” “true,” and “genuine.” Despite their distinct inhumanness, Vocaloids continue to be able to subsume, mediate, and reflect the desires of their fans, directly back at them, which allows them to maintain an appearance that remains all-too-human.

Lamarre, Thomas. The anime machine: A media theory of animation. U of Minnesota Press, 2009.