I Love Scotty: HQ Trivia and Apps as Television 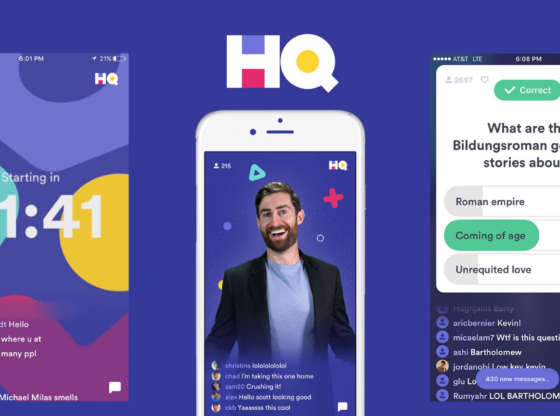 In August of 2017, Vine co-founders Rus Yusupov and Colin Kroll debuted HQ Trivia, an interactive trivia app where users can attempt to answer questions to win real money at one or two designated times per day. Most games are presented by charismatic host Scott Rogowsky, who has developed a cult-like following in the app as well as on social media. In addition, the app has been hosted by celebrity guests like Jimmy Kimmel and Robert DeNiro, and Rogowsky’s rise to fame was so raid was featured in the 2018 New Year’s Rockin’ Eve festivities. Unlike Vine and other video apps, HQ stresses a scheduled liveness and format that is more akin to television than social media. I argue that HQ is one of the first examples of the app as phenomenal television, as described by Amanda Lotz in her book The Television, Will Be Revolutionized. Understanding the peculiar case of HQ will allow us to conceptualize television moving forward.

The format of HQ is simple: a host reads 12 questions ranging from easy to hard, and players tap what they believe to be the correct answer. If the player gets every answer correct, they win or split the prize money with whichever players are left (usually around $2000 at the time of this article, but sometimes as high as $300,000 as was the case in a sponsored game hosted by Dwayne “The Rock” Johnson). It was this simple but enticing premise that drove the user growth of the app to skyrocket, from a few thousand users in August and September to over 2 million by the end of January.

From the early days of television, the game show has been a popular format for both viewers and producers. HQ follows the same formal characteristics of shows like Twenty One—they have a charming and clever host in Rogowsky, they have an easily-understood and interactive format, and they have a dedicated time and place where audience members can find and watch/play the game. Unlike most apps where the user can play at any time, HQ purposely limits its scope to just one or two 15-minute blocks per day. And therein lies its success. In an era where time-shifted viewing has become the norm, HQ’s producers have found a way to get viewers to tune in at specific times—by letting them be a part of the show.

HQ as television programming operates on the level of what Amanda Lotz calls “phenomenal television.” Lotz utilizes the term to conceptualize the new social significance of television in the post-network era. There is no doubt that HQ has become water cooler conversation. From Scott Rogowsky’s telling interview with the Daily Beast to Peter Thiel’s investment in the company, the app has been an exceptionally zeitgeist-y production. Lotz argues that both incongruity (separation from the traditional TV landscape) and social importance (doing something that has never been tried before), as well as “water cooler status,” are important in establishing phenomenal television. HQ hits on every one of these, from its novel distribution approach on its own app to its continued insistence on its own importance. Particularly interesting is the heavy use of the phrase “this has never been done before” by the hosts to legitimize and sell the program as something unique. The app’s developers and hosts HQ as a phenomenon because no company has attempted to stream a show via an app to this many spectators before. HQ also has the viewers—sometimes as many as 2 million of them—and those viewers are almost certainly more attractive to traditional advertisers who value the millennial market that has become so enamored with HQ. In many ways, HQ has become the television program many in the industry were hoping for.

It is far too early to say how much of a phenomenon HQ will be—whether it will burn out quickly or maintain a dedicated following. What is clear, however, is that its success will inspire a host of imitators (it already has one prominent one called “The Q”). In a way, HQ represents a move toward the past, toward a scheduled “must-see” version of television watching live is the essential part of the show. I would encourage scholars to take up the work of considering not only apps like HQ, but also scheduled streams on platforms like Twitch and Instagram live, as a kind of television—one that either fits into or eschews discourses of televisual quality.

Your Authentic Virtual Idol: Vocaloids and the Database Production Model
Celeste and the Rhetoric of Failure