Celeste and the Rhetoric of Failure

Home /Text/Celeste and the Rhetoric of Failure 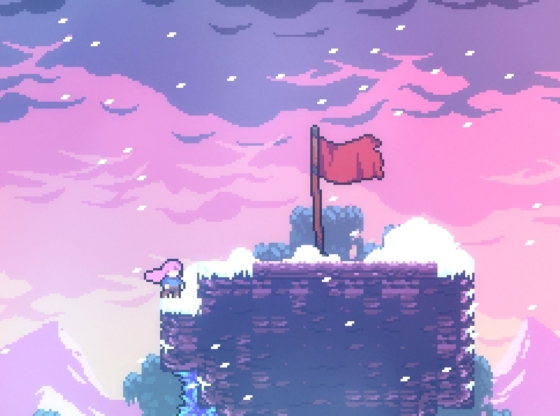 You leap across a ravine, your hair shines a preternatural blue as you boost your way above spikes and certain death, and you cling to the side of a mountain for dear life. As you scale the mountain, though, your body shows signs of fatigue and flashes to warn you that your strength is giving out. You hastily leap through the air once more for the next ledge, miss it entirely, and impale yourself on the spikes below. And then you respawn and try again.

In many ways, Matt Thorson and Noel Berry’s Celeste (2018) plays as a game of its time. Each platform level uses repetitive deaths and heightened difficulty to create the impression that you are learning through your failures, while dressing the gameplay in a retro-pixelated look. These features speak to a current vogue in indie development that incorporates retro gaming aesthetics to appeal to nostalgia and takes advantage of a cheaper form of development. Additionally, Celeste not only has ties to the games of old but seems particularly indebted to the success of fellow indie platformers like Cuphead: Don’t Deal with the Devil (2017), which forces its players to memorize attack patterns and maintain intense concentration in order to advance in the game, and Super Meat Boy (2010), which embraces its difficulty to the point of showing players an overlapping replay of all their deaths once they pass a level. Unlike other retro platformer throwbacks, though, Celeste offers players a unique case study by exploring themes about anxiety and depression. Considering this narrative positioning, how do the developers negotiate the desire to connect with an audience who might value these indie platformers for their difficulty and with more casual gamers looking to connect with Celeste’s themes? I argue that Celeste takes an intriguing rhetorical stance where it not only speaks to multiple audiences but also uses difficulty to reinforce the self-defeating feelings surrounding depression and anxiety. Ultimately, I believe the game strikes a delicate balance between different sets of expectations and helps to push the audience’s gaming experience in thoughtful ways.

To begin with, Celeste navigates the potential for multiple gaming experiences by providing an option for players to opt out of its difficulty. The game certainly does not invent or even reinvent lower difficulty settings but it does highlight them in interesting ways. Specifically, the developers included an ‘Assist Mode’ that gives players several options including slowing the pace of the game, granting invincibility or infinite stamina, and even allowing them to skip chapters entirely. Developers then frame this mode with a statement of purpose after players select it in the settings:

Celeste was designed to be a challenging, but accessible game. We believe that its difficulty is essential to the experience. We recommend playing without Assist Mode your first time. However, we understand that every player is different. If Celeste is inaccessible to you due to its difficulty, we hope that Assist Mode will allow you to still enjoy it.

The emphasis on accessibility helps to ensure that players without as much personal history or skill with gaming have a way to enjoy Celeste and experience the narrative. Meanwhile, the game includes hard to reach strawberry tokens as an added dimension of difficulty but notes in a load screen that players need not stress about collecting them:

Strawberries will impress your friends, but that’s about it. Only collect them if you really want to!

In these cases, the game goes out of its way to frame the gaming experience as something that exists on a spectrum and stresses inclusivity. However, the game’s suggestion to try and play without the assist mode does suggest a preferred path of gaming, while comforting load screen messages like “just breathe” and “you can do this” continue to encourage the players grappling with the game’s learning curve.

For those who embrace the game’s difficulty, they find that Celeste uses failure to reinforce its themes on anxiety and depression by encouraging players to accept failure as a part of learning. In another load screen title card, the game tells its players to feel proud of their deaths and states that “The more you die, the more you’re learning. Keep going!” The game also posts the number of player deaths for each level as a badge of honor. Meanwhile, as players embody the avatar of Madeline and climb Celeste Mountain, they increasingly find that the task of scaling this mountain stands in for a more personal journey to overcome feelings of anxiety and despair. The game even has sequences where Madeline’s internal struggle manifests in a shadow version of herself that impedes her progress, intimating the way that these conditions can feel self-defeating. However, by recontexualizing failure as growth it removes the stigma around that feeling of getting in your own way and encourages players to view failure as one step among many toward eventual self-affirmation. Arguably, this creates what Ian Bogost refers to as a procedural rhetoric where the game authors “arguments through processes” such as “rules of behavior [and] the construction of dynamic models.”[1] The use of failure as a part of learning and understanding, along with the way that players vie with another version of their own character, speaks not only to how depression and anxiety can manifest but also to how those dealing similar issues can gradually work through their feelings while not punishing themselves for every small step backward.

The more players engage with Celeste’s gaming mechanics, the more they can see failure as productive. In this way, Celeste gets the most of its failure and echoes Jesper Juul’s theorization of the concept’s more positive attributes:

We are more likely to search for causes for failure than for causes for success. Whereas success can make us complacent that we have understood the system we are manipulating, failure gives the opportunity to consider why we failed (as long as we accept responsibility for failure). Failure then has the very concrete positive effect of making us see new details and depth in the game that we are playing. […] This is how games help us grow: we come away from any skill-based game changed, wiser, and possessing new skills.[2]

In the case of Celeste, we see this newfound wisdom embedded into the narrative and aesthetic fabric of the game. Surely, many players will only come to this retro platformer looking for a challenge and they will certainly get one. But for those invested in the game’s themes, they might just come away with a new perspective on the fleeting and productive nature of their own personal failures.