TINGLES!: ASMR on YouTube and New Potentials for Studying the Embodied Audience

Home /Text/TINGLES!: ASMR on YouTube and New Potentials for Studying the Embodied Audience 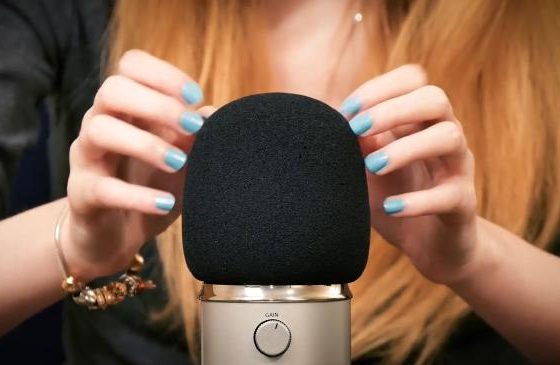 A woman you’ve never met before is gently inserting a large purple feather into your ear. She’s staring right into your eyes as the feather digs deeply into your ear canal with an all-consuming scratching sound, and whispers, “Just relax, let me take care of it. It’s time for sleep.” Thus begins a video posted to YouTube by user Darya Lozhkina, entitled “ASMR Ear CLEANING & Massage by a SERVING GIRL, tingles to HELP You SLEEP peacefully.” A few years ago, stumbling upon this content by chance might have set off alarm bells for The Weird Side of YouTube; to the untrained ear/eye, this video may appear at first blush to be overtly sexual or fetishistic due to its emphasis on body sounds, organs, and textures. However, Lozhkina’s creative work is actually produced with the intent to evoke a warm, non-sexual sense of calm in her viewer, known as ASMR (short for Autonomous Sensory Meridian Response).

Since approximately 2009, YouTube has fostered a steadily-growing community of content creators around the phenomenon of ASMR – for those not familiar with the genre, the video above by GentleWhispering is an excellent introduction). ASMR videos are distinguished by their intent to transfer unto their audience the pleasant, drowsy emotional/physical affect known as “tingles”: a simulacra of relaxing sensation usually brought on by the judicious application of sound and touch (i.e. a haircut, or a teacher giving quiet and patient instruction). With the exception of several psychological studies designed to measure ASMR’s physiological effects, “ASMR-tists” and their audiences have not been given much academic attention (though more and more mainstream media outlets are covering the community as it slowly mainstreams). I would suggest that ASMR content and the community around it presents a fascinating set of concerns – and possibly, a new rubric for studying audiovisual production and reception – for media scholars. Corporeality and its attendant sensations are the primary concerns of the ASMR-tist and key to the viewer’s enjoyment. The creator addresses the viewer’s eyes and ears but intends for stimulation to be felt elsewhere, beyond the screen. These videos challenge the teleology of digital content, endeavoring towards a purposeful and compelling boredom; indeed, ASMRtists are the only auteurs who might hope the audience falls asleep halfway through the show. Can we find the affects, and effects, of ASMR in other kinds of media content? How do film, streaming television, ads, and more provoke sensations (rather than emotions or thoughts) through A/V design? And how do we, as viewing bodies, react to and even use those sensations?

In my work so far on ASMR, I’ve started categorizing “tingles” into five broad categories – generalized aspects about these videos that provoke those warm, meditative, flowy feelings that users seek. These categories are by no means exhaustive, and several often work together in tandem. But perhaps they might be generative for others studying this phenomenon, or anyone interested in following the thread of my broader questions above:

ASMR is a world that keeps on giving, in terms of the great diversity of content and approaches available to media scholars. The tingle economy caters to millions of viewers with a variety of triggers and demands. Dozens of “utility-based” sub-genres exist, each with their own unique underpinning of identity politics, fandom, and performance and production practices: “slow mouth sounds,” “makeovers,” “teaching/tutoring sessions,” “hair brushing,” “tapping”…The “eating video” sub-genre, for example, foregrounds the vividly grotesque sounds of chomping, chewing, cracking, and swallowing – which many users find quite relaxing to watch and listen to. Utility often acts as the determining factor of ASMR’s taxonomic classifications on YouTube, demonstrating this content’s parasympathetic engagement with the digital. The most-viewed ASMR eating video on YouTube, at nearly 35 million views, features the ASMRtist “Hungry Cakes” consuming a large fast-food meal. As in all of her videos, Hungry Cakes is only framed from the mid-face down, featuring simply the food and drink to be enjoyed, the utensils, and the mouth that will do its work. The sharp sound quality highlights the crackle of each lettuce leaf and squish of meat, filmed in bright, popping color. The effect takes the content beyond the YouTube interface and beyond the screen – into a place of immediacy. The user’s tingles hinge on the collapse between themselves and the actor within the screen; Hungry Cakes’ mouth becomes an anonymous mouth, perhaps the viewer’s mouth, and the content prompts a kind of synaesthetic response (which, in my case, is often intense snack cravings).

It’s also imperative, when thinking about ASMR’s utility and textual dynamics, to consider how dynamics of social power play into varied user experiences and the evolution of this content over time. In particular, when we consider voices and bodies as tools for evocative sensation, we encounter specters of politicized identity. I’m interested in further exploring the ways in which tingles are prompted and prevented by producer/user negotiations of gender, ethnicity, class, and ability. Due to the primacy of female-identified creators and rhetorics of caretaking and sensuality, as well as ASMR’s frequent intersections with digital trends of Asian origin (“mukbang” eating shows, for example), these are concerns which beg for closer inspection. Indeed, centering identity politics in further inquiries down the ASMR rabbit hole could yield fascinating insights for reception as a whole – for those of us interested in viewers as bodies. Everybody, and every body, utilizes media (ASMR or any other type) for self-regulation and pleasure in vastly different ways, and I suggest that reception studies that center physical affect keep these considerations in mind.