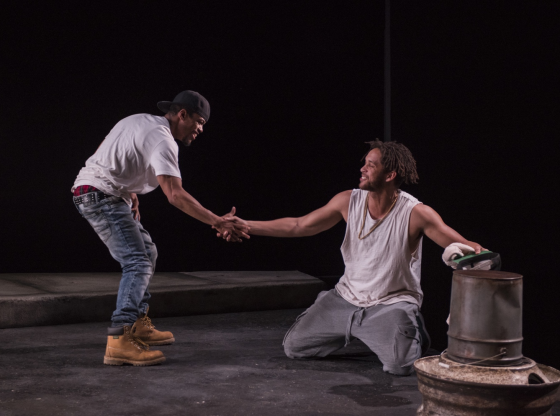 In May, Spike Lee took his place on the Palais steps at the Cannes Film Festival alongside Star Wars’ actor Adam Driver and Denzel Washington’s son, actor John David Washington, for the world premiere of his film BlackKklansman. The film was released in U.S. cinemas on August 10 and garnered mixed to positive reviews, with the international audience at Cannes welcoming Lee’s stylish and irreverent period comedy about a black police officer who infiltrates the inner circle of a Colorado branch of the Ku Klux Klan. A new Spike Lee “joint” always generates a heightened level of scrutiny from critics and audiences—in many ways Lee’s consistent output of more than 20 feature films (not to mention dozens of documentaries and creative work across a variety of media) over his decades long career is seen as marking the evolving discourse around racial politics in America. The hyper-attention paid to Lee’s personal politics occasionally obscures some of his more experimental filmmaking ventures, which is certainly the case in 2018, considering Lee released not one, but two films.

On April 20th, Amazon Studios began streaming Pass Over, a filmed performance of Antoinette Nwandu’s play performed at Chicago’s Steppenwolf Theater. Lee and a small camera crew collaborated with Danya Taymor (niece of Julie Taymor), who directed the stage play, to shoot several performances during the summer of 2017. The unceremonious release of the film on Amazon’s streaming platform with very little promotion affirms the tepid response to filmed theater that dominates popular discourse. However, the film itself is a powerful testament to the possibilities of such hybrid forms of media. My last article traced the growing trend of cinematic and digital afterlives of theatrical performances, in part due to the commitment of the National Theater Live’s practice of transmitting select performances to cinema audiences around the world. Other theater companies have followed suit, with the Globe Theater even selling DVDs and digital copies of their Shakespeare performances under the “Globe on Screen” banner. Pass Over exists under the umbrella of film/theater hybrid, but the involvement of a director like Spike Lee, who is indelibly linked to film, demands attention be paid to how Lee is using cinema to disrupt, destabilize, and assert his cinematic voice on a text marked as explicitly theatrical.

The film begins with a documentary gesture, as still and moving images depict buses being loaded with members of the Chicago South Side community. They are on their way to a performance of Pass Over (the film presents itself as one continuous performance of the play, although it is more likely that Lee and his camera crew filmed multiple performances and edited them together). Echoing the technique that Lee deploys to great effect in BlackKklansman, the film cuts to the faces of these audience members periodically throughout the performance. However, while the faces in BlackKklansman float around the frame forming a gorgeous mosaic, Lee’s camera holds on the individual faces of the Pass Over audience, registering their consternation, their enjoyment, their anticipation, and their despair as the play unfolds.

A match cut from the real intersection of Dr. Martin Luther King Drive and East 64th Street to the onstage street signs reinforces the direct connection between the lives of the play’s protagonists, Kitch (Julian Parker) and Moses (Jon Michael Hill) and the lives of those sitting in the audience. The prop street lamp flickers on, signaling nightfall. Moses and Kitch awake under the cover of darkness and muse about their aspirations and fears, all while trading barbs with the playful rhythm of friends who have had the same conversation hundreds of times. The cameras are onstage with them, following them around and allowing Lee to cut back and forth during their exchanges, underscoring the fast-paced give and take of their delivery. Gunshots erupt from time to time and halt their fun. The offstage/offscreen nature of these violent noises work well in both the theatrical and cinematic contexts, and Lee and Taymor both understand how to slowly ramp up the impact of these sounds over the hour and fifteen-minute duration of the play. Lee does so by allowing his cutting to become more frenetic with each barrage of gunshots while Taymor shifts the lighting from yellow to blue as Moses and Kitch drop to the ground in response to the threat of violence.

The play’s other two characters bring to life Moses and Kitch’s fears in the form of a police officer who harasses and abuses them, and an unusually friendly white man wearing a suit and bowtie straight out of the 1950s who shares a picnic basket with the suspicious duo. The proximity of the cameras to the two protagonists tethers the viewer to their world where threats exist just on the periphery. Their desire to break out and escape the cycle of violence is reflected in the fury of their words. Lee’s Do The Right Thing (1989) is an obvious point of comparison as it similarly signals that violence is not a matter of if but when in the lives of young black men.

Lee’s choice to film this play certainly seems like an instance of artist and material being suited to one another. The final product, the film Pass Over, raises intriguing questions about authorship and the limits of hybrid forms of media. For instance, Glenn Kenny of the New York Times called the film an “adaptation” to emphasize Lee’s hand in shaping the play text with his camera. Complicating the film’s hybrid status is the fact that I suspect Lee and his camera crew shot a few short scenes of the play with no audience present. Towards the end of the first act, for example, the camera points down at Moses and Kitch lying on their backs, glaring up at the heavens. It’s possible the cameras captured this moment during a performance, but much more likely (and based on the sound design), it was filmed with no audience, giving Lee more control and allowing him to alter some of the blocking.

Pass Over represents another step forward in the melding of performance media. The final product, which combines Antoinette Nwandu’s writing, Danya Taymor’s direction, Lee’s filmmaking, not to mention the affecting performances of Jon Michael Hill and Julian Parker, testifies to the importance of collaboration in art. In my next installment of this series, I will spotlight several recent and forthcoming plays that push the limits of hybrid forms—not just “filmed theater,” but also “cinematic plays,” most notably Network, which will be coming to Broadway in early November. Stay tuned!

This Show May Not Be For You: How the ’13 Reasons Why’ PSA Complicates as Much as it Clarifies
“I’ve Waited for Him”: Halloween (2018) and Rebooting the Franchise