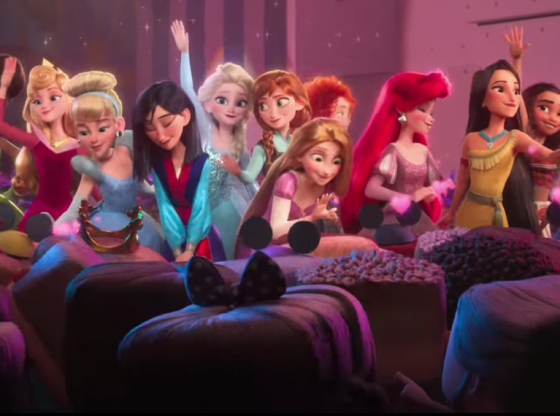 After the advertising campaign for Ralph Breaks the Internet, it may surprise you to learn that the film itself is not about Disney Princesses. The scene where one of the protagonists, Vanelope, lands in the princesses’ communal dressing room got its own teaser and is prominently highlighted in the official trailer. A large percentage of the film’s merchandise derives from this scene in which the princesses all wear modern garb inspired by their franchises. It is one of the moments where aesthetically you are tempted to roll your eyes, but from the industry side of things you are tempted to give a standing ovation. The Wreck-It Ralph franchise is meta to begin with (he first film is rooted in early video game culture and characters like Pac Man and Q*Bert are seen wandering in the background). By setting up the expectation for meta humor and commentary and by expanding the narrative world into the modern internet, the studio can include its many other franchises within it without it seeming forced.

Since the scene had a natural narrative justification and meta humor is fun, the academic in me does not have an issue with the shameless merchandising opportunity. What caused me pause is the actual conversation Vanelope has with the princesses. The central joke is that they interrogate Vanelope to find out if she is a princess by asking her funny questions based off of clichés from the previous fairy tales. The central question comes from Rapunzel who asks her, “did everyone assume all your problems got solved because a big strong man showed up?” This is a wink and a nod to the many feminist criticisms that have been lobbed (legitimately) at the Disney princesses over the years. The problem is that Disney at this point is so aware of these criticisms that they have done this joke already. In fact, a version of this joke has appeared many, many times. Hercules (1997), Mulan (1999), Enchanted (2007), Tangled (2010), Brave (Pixar, 2012) and Frozen (2014) all have jokes based on the sexist history of the narrative where the heroine is aware of the gender bias working against her.

By presenting it as a fresh joke in Ralph Breaks the Internet, it is almost a step back in Disney’s longer feminist evolution, which is only harmful in the fact that they advertise it as a step forward. In many ways it distracts from the stronger narrative of Vanelope finding a strong female role model in Shank (voiced by Gal Gadot) where no mention needs to be made of Shank’s gender. For me, that particular forward-thinking narrative is more in line with Moana (2016), which I present here as a point of comparison. In Moana, the feminist interventions are all rooted in the actions of the narrative rather than the commentary of dialogue. I outlined some of these interventions back in 2016, and therefore beg your indulgence as I reprint excerpts from the far more casual (and enthusiastic) blog post I wrote about the film at the time. I reprint this only to point out the many things I feel Moana does that the scene in Ralph Breaks the Internet fails to do, therefore making it a stronger feminist model to follow for the future. Recognizing issues in gender representation was the first step forward for Disney – but now that the studio has commented upon it multiple times, it is more important that they write narratives like Moana’s where they act on those realizations.

Okay, so you know the obvious things that make Moana more of a feminist princess: she is an explorer, she doesn’t have a love interest, she has thighs. But that is merely scratching the surface. First, let’s look at the big picture. Moana is presented with two options for her life: her safe option is literally staying home and becoming chief or option two is choosing to throw caution to the wind and adventuring into the ocean to save the world. What is important to note here is that she is being groomed for greatness regardless of her supernatural adventure. You don’t have to save the world to be a strong woman in Moana’s world.

Now let’s look at her sidekicks. If I asked what you remembered from Frozen beyond the melody to “Let It Go,” I’m almost certain you’d say the talking snowman, Olaf. He dominated the marketing and the merchandising. He stole the scenes he was in. Moana’s sidekicks are not like that. First of all, they are silent. Pua is adorable, but only in 10 minutes of the movie. Hei Hei is hilarious, but he is truly merely comic relief. The creators actually let Moana be the star of the show and it feels so good. Maui, the demigod Moana travels with, is a little more complicated. He threatens the show a little bit, seeing as he is being played by the effortlessly charming Dwayne “The Rock” Johnson – but to The Rock’s credit, he never falls into Olaf territory. In fact, Maui is kept just obnoxious and unlikable enough to keep Moana as the hero. By doing so, he also becomes his own representation of a type of sexism.

First, there is his song “You’re Welcome” where he literally demands that Moana thank him for all the amazing things he has done for the world. His ego is unstoppable and he underestimates Moana. While he may literally demand that he be the star of the show, we (the viewers and the creators) never actually let him. We do get some lovely Maui backstory and he does get friendlier, but it is all in service to Moana. She helps him find himself. He helps her find her way to save the world. When given the chance for him to save the world during the climax of the movie, he fails. At one point earlier in the film, Maui makes Moana be “bait,” a role every sad token female has had to play at some point in her life. It proves only mildly effective and is portrayed as ridiculous the whole time. Moana should not be dressed in shells and incapacitated. It is therefore quite the amazing turnaround when Maui oh-so-quietly takes on the role of bait as he distracts Te Ka so Moana can return the heart of Te Fiti. Once again, Moana is the star.

Lastly, and on the same note as Maui’s song, two of the major villains of this movie are men exhibiting some of the traits of the modern patriarchy mentioned above. First is Moana’s father who is so concerned for Moana’s safety and tradition that he does not want her to venture out and explore. He is relatively benign, but backwards all the same. The second is the fabulous Lalotei who like Maui, has an ego so large he cannot care about anything beyond himself and the objects he collects. These are the type of obstacles Moana has to fight and while it is not insignificant that they are both male, it is not shoved in our faces either.

Compare these men now to the women of Moana. It is not just Moana, with her quick wit, charm, incredible climbing, jumping, oar wielding and wonderfully messy hair, but it is also her wacky and funny Grandma who knows exactly how to point Moana in the right direction. It is the women of this movie who hold the power, but they do without bragging about it. This is best encompassed in the moment of the movie that got me hooked. That is when Moana’s mostly quiet mother catches Moana running away. Instead of stopping her, she quickly helps her pack. It is entirely unnecessary to the plot in that Moana was perfectly capable of running by herself. It is her mother’s blessing that makes this moment so powerful though. Not only is Moana striking out on her own as a modern woman, she is doing so with the encouragement and help of the women who have come before her.