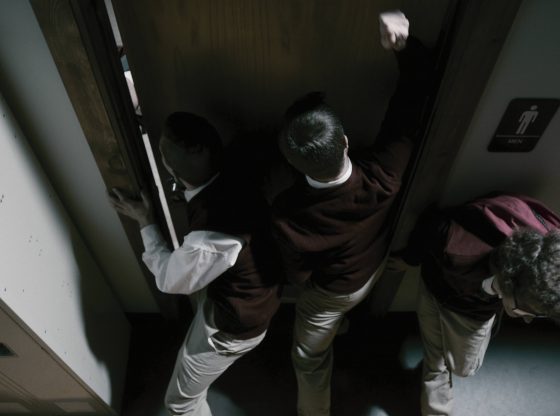 We’ve heard you, John Landgraf… there sure is a lot of TV these days. It sometimes feels like analysis paralysis is all but inevitable. Yet Playback’s talented collection of scholarly writers has actually managed to watch quite a bit of television this past calendar year. In this week’s five part TV Round-Up series, they try to make sense of it. Today, Laura Schumacher, Jonathan Gray, Dillon Mitchell, Olivia Riley, Nick Laureano, and Anthony Twarog consider the latest seasons of a few of Netflix’s original (or original-ish) programs. Schitt’s Creek is a Canadian gem of a show (aired in the U.S. first on Pop, then on Netflix) featuring the Rose family, once the picture of stereotypically excessive wealth, who lose everything and are forced to move to the rural town of Schitt’s Creek. What makes Schitt’s Creek feel so unique in this current television moment is that is free from lasting conflict. While many current comedies reach for “quality TV” greatness, featuring dark themes and antihero characters, Schitt’s Creek feels like a throwback to sitcoms of yore when the conflicts were low stakes and easily resolved in thirty minutes. And many of the episodic stories do follow a familiar pattern of slapstick, low stakes humor: Johnny (Eugene Levy) cannot pose for a promotional photo without looking exceedingly awkward, or David (Dan Levy) worries that the lotion he is selling in his store is causing a rash. But this series is far from rote. The lack of lasting conflict is a feature of the show, not a bug, often used to carry more implicit themes of what happens when you make yourself vulnerable and open to stable, supportive love. The apex of this message is in David’s storyline with new boyfriend Patrick. The couple experience only a few small bumps on their road to happiness on the level of plot, but it is David’s much quieter evolution towards becoming someone who can trust another person and accept their love that demonstrates Schitt’s Creek has more on its mind than easy laughs. When it feels as though a comedy must be high concept and/or a bit depressing to be considered quality TV, Schitt’s Creek is a welcome reminder that weighty themes and character development can come from even the sweetest of storylines.  — Laura Schumacher American Vandal’s second season is the shit. Anyone who enjoyed the first season no doubt had fears that a return trip to the well would liquidate the show’s assets and empty its log yard of all that’s good. The announcement that the deuce season was in the pipeline was a full moon over troubled waters. But with the precision with which a star baker knows how first to pinch a brioche, thankfully the writers knew we weren’t just in the show for the dick jokes – there was more substance to be probed in American Vandal Number Two. When nature called, they didn’t let it go to voicemail. It was divine relief to see them realize how important high school language, politics, and communication were to a story about poop crimes, and to examining who really gets shit on in high school. So, if you haven’t seen it already, no more straining: drop the kids off at the pool, drop anchor in front of the television for a few hours, and watch. — Jonathan Gray

Netflix’s best show returned this year with arguably its strongest season yet. No stranger to taking on current events, BoJack Horseman’s fifth season finds the show grappling with the #MeToo movement, as well as its own place in the perpetuation of the Troubled Man narrative. Once flaunting names like Soprano and Draper as a comparison for the show’s eponymous protagonist, BoJack Horseman attempts to address the unsavory characters these narratives put forth as leading men, all under the meta-guise of BoJack’s new show, itself a Troubled Man story run by the Troubled Genius Flip Vickers (an extremely game Rami Malek).

As with past seasons, there is a stand out episode (in season 3, it was the underwater episode; in season 4, it was the dementia episode), this time centered entirely around BoJack delivering the eulogy for his late mother. Will Arnett’s voice acting remains exceptional, and this episode thrives on his ability to spiral from heartbroken to indignant at a moment’s notice. The second episode, centered around Diane travelling to Vietnam, is also beautiful, a Lost in Translation-style narrative bathed in the character’s inability to connect with her heritage.

BoJack Horseman has often asked difficult questions of its character and its audience, but its fifth season cuts the bullshit and addresses itself directly. It interrogates the idea of whether these narratives are worth pursuing if they “help dumb assholes rationalize their own awful behavior.” As it’s done in the past, the show doesn’t offer definitive answers. — Dillon Mitchell Season three of Netflix’s Daredevil makes good on the promise of two seasons’ worth of character growth and narrative development by taking on one of the most famous Daredevil comic arcs, “Born Again,” as the series’ eponymous hero is brought lower than ever before by the villainous machinations of Wilson Fisk. The whole cast delivers some of their best performances to date, from the return of Vincent D’Onofrio’s deeply nuanced and chilling Fisk (who finally gets the long-awaited codename “Kingpin”) to newcomer Wilson Bethel’s disturbing and yet eerily captivating Benjamin Poindexter (as Bullseye, perhaps Daredevil’s most infamous adversary). That said, Deborah Ann Woll may be the true hero of season three, with Karen Page carrying as much of the central plot and emotional weight of the show as Charlie Cox’s Matt Murdock. Narrative breadcrumbs left throughout the first season, from Matt’s MIA mother to Karen’s mysterious and tragic past, are taken up and fleshed out in intricate, satisfying ways, as Netflix’s first original superhero offering begins to reach maturity. — Olivia Riley You’d be hard pressed to find a review of Ozark that doesn’t compare the Netflix crime drama unfavorably to Breaking Bad. Such comparisons aren’t entirely without merit. At their core, both shows depict the transformation of a seemingly mild-mannered man into a crime lord. But while the shows share several story elements, Ozark is much more than a failed knockoff of Breaking Bad. While Walter White and his family were avatars of countless middle-class families hit by the Great Recession, the Byrde family begins Ozark as members of the American elite. Marty Byrde (played by Jason Bateman), we find out in the pilot episode, uses his financial planning business as a front to launder money for Mexico’s second largest drug cartel. Whereas early episodes of Breaking Bad see the Whites distressed over the run-down state of their cars and home, we meet the Byrdes in a home worthy of a Nancy Meyers film. Wealth and social status continue to animate the story of Ozark; consider that Marty graduates from laundering money through a run down hotel in the first season to hobnobbing with politicians in order to construct a riverfront casino in the second season.  If Breaking Bad is a parable about the Great Recession, then Ozark is a satire of post-Recession ruling class mores. –– Nick Laureano In the season finale of The Gauntlet, Jonah Heston and the Bots suffer through Ator, the Fighting Eagle, a Conan knockoff (the Barbarian, not the O’Brien) featuring sorcery, a spider-obsessed cult, and Miles O’Keefe’s shapely pecs. It’s a clear nod to one of the pinnacle Joel-era riffs, Cave Dwellers (aka Ator the Invincible), and a friendly shot across the bow of the MST3K splinter group, Rifftrax, which riffed the Fighting Eagle just last year. Mystery Science Theater 3000 has had three hosts and even more host networks, the latest of which, Netflix, has given viewers a second reboot season of maximal efficiency: six episodes (just enough to be binged), near-constant pop-culture references, polished host segments featuring nerd culture luminaries Felicia Day and Patton Oswalt, and some darn good musical numbers. But when comedian Joel Hodgson approached a Minneapolis-St. Paul broadcaster exactly thirty years ago with an idea for a low-budget show in which he and a few other comedians improvised jokes while watching absurdly bad movies, MST3K was industrially shabby because it had to be, a televised hangout which revelled in its own sense of liveness. Joel and his robot friends weren’t just spitting out jokes; they really seemed to be watching movies, laughing along with the viewer, slipping up, ribbing each other–y’know, having fun! In the spaces between scripted moments, Tom Servo developed a fragile sense of self-importance, and Crow a puckish charm. The Gauntlet, however, with its metacommentary and scripted sense of play, feels a bit like CGI Yoda: an attempt to bring back a beloved icon that’s sincerely conceived, theoretically just as watchable, still pleasurably strange, but somehow just a bit hollow in the end. –– Anthony Twarog