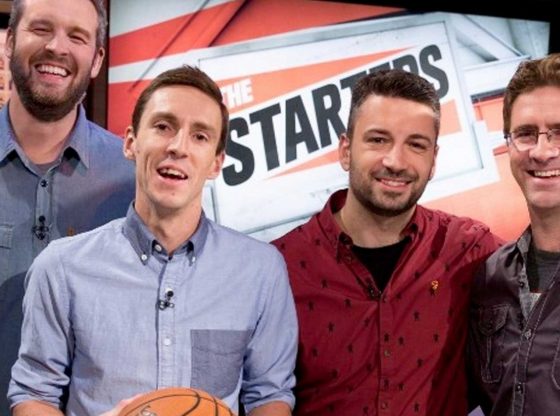 We’ve heard you, John Landgraf… there sure is a lot of TV these days. It sometimes feels like analysis paralysis is all but inevitable. Yet Playback’s talented collection of scholarly writers has actually managed to watch quite a bit of television this past calendar year. In this week’s five part TV Round-Up series, they try to make sense of it. Today, Jackie Land, Tom Welch, Austin Morris, and JJ Bersch consider some of television’s most prevalent but widely underdiscussed content: miscellany, here in the form of reality television and sports. ABC’s Bachelor-esque series The Proposal premiered in June 2018.  In the promo ad, host Jesse Palmer (former NFL quarterback) announces, “Let the soulmate pageant begin!” a line which must have come straight from the network pitch (“it’s like Miss America meets The Bachelor”), but doesn’t begin to prepare viewers for the absurd, cringeworthy theater to which they are about to bear witness. In each hour-long episode, 10 contestants compete for a mystery bachelor or bachelorette, who remains hidden in a pod by the stage until a reveal. Then, there are four rounds of eliminations – an initial one after the introductions, a beachwear round, a deal-breaker question round, a round for the bachelor/bachelorette’s best friend to question the contestants, and approval from the parents. Then, in the final segment, either the bachelor emerges from the pod to propose marriage, or multiple male contestants propose to the bachelorette. One critic wrote, “It’s like an arranged marriage, if the marriage were arranged by soulless reality-TV producers who cared nothing about the people involved, beyond whether they’d make for good TV.” While unnerving and often hard to watch, the show cries out for our analysis, perhaps understanding it as the logical conclusion of the dating game show in an era marked by the commodification of marriage, as a hyperdrive extension of the microcelebrity engine that is “Bachelor Nation.” — Jackie Land American Ninja Warrior (ANW) is fascinating to me for a few reasons. The first is that they are desperate to brand it as a sport, despite the fact that the rules change so frequently and the courses vary so wildly that it doesn’t feel equal in any meaningful way. Nevertheless, there are so many references to the competitors’ athletic backgrounds and physiques, so even if they played sports in high school that qualifies them as an athlete more than just completing obstacle courses. The other attempts at branding the competitors are interesting because every athlete has to have a niche characteristic that makes them unique. This is usually vocationally-focused, so one athlete who is a Catholic abbey worker is the “Papal Ninja” and another who works as a weather man is “The Weather Man.” Newcomers are often defined by their life experiences, which usually involves themselves or a loved one having some variety of ailment or struggle that they had to overcome to get where they are. What’s more interesting is the fact that the higher-level competitors rarely get those kind of storylines, because they’re so well-known. These athletes are defined either by how success has affected them or wondering how they will overcome an obstacle that they have struggled with in the past. These stories often take precedence over the competition, so many runs are shown only in brief summary rather than in their entirety. Imagine if the NFL devoted 2 hours to introducing all the players and giving some of the more charismatic ones video packages, and then condensed the game itself to only an hour of highlights. That’s American Ninja Warrior. — Tom Welch Top Chef takes itself incredibly seriously, eliminating chefs with incredible pedigrees (and Michelin stars) for forgetting to add finishing salt to one of 300 plates of food. Host Padma Lakshmi and head judge Tom Colicchio are always clear about which high-level skill of being a chef they’re testing—teamwork, consistency, artistry, versatility—and the contestants’ respect for the challenges and the judges is always clear. The show’s innovative online-only offshoot Last Chance Kitchen, which enables eliminated contestants to battle their way back into the main competition, still feels awkwardly integrated into the competition proper but is, on its own merits, essential viewing. Challenges in LCK respond to the main competition in witty ways, and Colicchio’s good-natured, avuncular humor adds depth and shade to his affect on the main show. — Austin Morris Shark Tank should be my least favorite show on Television because it’s just a bunch of rich white people (and occasionally Daymond John) doing capitalism. There’s also a surprising amount of math involved for the viewer in calculating valuations, royalties, and profit margins. But I can’t stop watching it. Each “shark” has become so good at defining themselves and leveraging their background and expertise into a cohesive brand to the point that presenters will cater to their interests. Every shark has their niche—Barbara has real estate, Lori has gadgets, Daymond has fashion, and Kevin has whatever he can use to push an aggressive royalty deal. In some ways, the show does exemplify the farcical nature of venture capital as a system, because the sharks are just as likely to invest in a sound business as they are to invest in somebody because they like the cut of their jib. I’m more interested in the relationships between the sharks, however, who often don’t seem to like each other and will try to box their fellow sharks out of a deal—sometimes out of spite. It’s also telling to see what kind of outrageous ventures billionaire Mark Cuban will go for compared to Lori Greiner’s decisions given her paltry $100 million net worth. Shark Tank is like a capitalism-themed soap opera that I can’t quit, though I sometimes wonder if it’s propaganda for the American dream or a solemn warning. — Tom Welch Now in its seventh season, Vanderpump Rules — originally a spinoff of The Real Housewives of Beverly Hills, now a ratings juggernaut in its own right — serves viewers the essential reality television staples (pretty white people coupling up and breaking up in increasingly improbable permutations) with a quintessentially millennial twist. Everyone is in on the joke that the cast, wannabe showbiz folks who ended up as servers at Lisa Vanderpump’s restaurant SUR, in fact barely work there, instead making the majority of their money from Instagram #sponcon. Vanderpump Rules is tremendously entertaining precisely because it constantly, obviously strains against its generic and textual boundaries.  — Austin Morris *extremely Bill Simmons voice* The NBA is drunk this year. Teams are scoring the most points per game since the 1985-86 season, and they are playing at the fastest pace since 1988-89. The league-wide embrace of the three-point shot has resulted in wild variation between games — if a team gets hot, good luck stopping them, whether they’re the reigning Golden State Warriors or the lowly Phoenix Suns. Basketball is being played more intelligently than it ever has before, even though it doesn’t always look like it — Brad Stevens has done the math, and eventually the Celtics will quit missing all of those open jumpers. The change in style has coincided with an uptick in interest, with this week’s Christmas Day games receiving the highest ratings since 2011. All but one team in the West is within at least four games of a playoff spot, and the top of the East hasn’t been this interesting since LeBron took his talents to South Beach. It is a very good, if strange, time to be a fan of professional basketball…

…which is why it is so helpful to currently have the best television coverage the league has ever had. ESPN’s The Jump is probably a cut above the rest. Host Rachel Nichols and a rotating roster of basketball writers (like Zach Lowe, Amin Elhassan, and Kevin Arnovitz) and former players (like Tracy McGrady, Paul Pierce, and Scottie Pippen) know when to keep things light — the show features numerous “shows within shows,” such as Haywatch‘s coverage of Gordon Hayward’s comeback or Dances with Wolves‘s look at the drama in Minnesota — but also when to dig into more serious issues, whether it be Derrick Rose’s off-the-court legal issues or the rampant bad behavior in the Dallas Mavericks organization, wherein Rachel Nichols righteously grilled Mark Cuban for an entire hour-long episode. An old standby like TNT’s Inside the NBA may lack the nuance of The Jump, but it more than makes up for it with personality: as evidenced by this clip, wherein Shaq, Kenny, and Chuck box alongside the stars of Creed II, it is still one of the funniest programs on television. The other standout remains NBATV’s The Starters, which often rivals The Jump‘s nuance and features its own wacky sense of humor — co-host Leigh Ellis is, unquestionably, the most interesting man alive. And all of this is only scratching the surface of the league’s strong lineup of media coverage; from the national play-by-play brilliance of Mike Breen and local masters like Marques Johnson and Walt Frazier to the burgeoning world of podcasting, where professional writers like those on Sports Illustrated‘s Open Floor mix with the comedians found on The Flagrant Ones and Buckets, it has never been easier to make sense of — and enjoy — professional basketball. — JJ Bersch