“Yes, and”: Group Mind and the Problem of Neoliberalism Built Into the Improvisation Community

Home /Text/“Yes, and”: Group Mind and the Problem of Neoliberalism Built Into the Improvisation Community 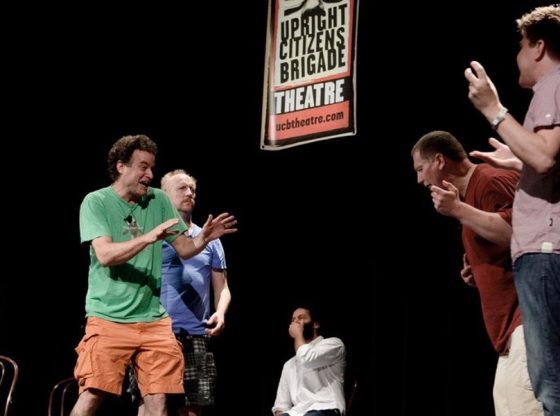 Recently, there have been two significant closings of improv theaters which have put near-mythic figures in the improvisational community under scrutiny: improvOlympic (iO) West, run by Charna Halpern, and the East Village location of the Upright Citizens Brigade (UCB), still nominally run by the “UCB Four” (Amy Poehler, Matt Besser, Ian Roberts, and Matt Walsh). Considered career-makers for aspiring young comedians, these theaters and the legends that ran them were for many years considered unmitigated successes. However, these recent closures have many publicly questioning the efficacy of their management and certain controversial decisions such as UCB’s policy of not paying performers. What this public debate does not contend with is how those who created the foundational texts and practices of the U.S. improv community call for an unquestioning adherence to improv as a fulfilling and self-improving art form; in turn, this puts those who think of it as a professionalization tool in direct tension with said community. It is the former ethos that has allowed these theaters to function as they have for many years. This includes not only leaving performers unpaid, but also charging upwards of $475/course for a few weeks of classes, requiring performers to take several course levels before they can audition for the house teams, and relying on unpaid “internship” labor for jobs such as door bouncers and bartenders. The Los Angeles location of iO closed its doors in February of 2018.

An insistence that someone must approach improv with love for the form, rather than a wish to be discovered, is reiterated by many, despite the fact that the field has become increasingly professionalized. The stand-up comedy circuit still provides a ladder for mainstream success that comedic hopefuls can climb, but improvisational theaters such as The Second City, UCB, The Groundlings, and iO have grown in prominence as venues for training and scouting professional comedians. The tiered course curriculum offered at these theaters, with a built-in “graduation” after a certain number of courses are taken, provides an institutional structure through which comedians can pass in a creative industry where success is often marked by unpredictability and luck. While the tradition of improvisational comedy can be traced back to the commedia dell’arte theater of 16th century Italy and through acting traditions that have drawn upon the practice for centuries, the improv theater and course structure that is now popular in the U.S. essentially began in 1959 when The Second City Theatre opened in Chicago. The Second City’s success spawned imitators that differentiated themselves by focusing on a specialized form of improv such as The Harold at iO or by positioning themselves as young renegades willing to attempt experimental improv, as the founders of UCB did. These theaters became successful on two fronts: as legitimate theaters that drew sizeable audiences and sold out shows regularly and as training grounds for a new generation of comic.

While these theaters have proven to be successful springboards for mainstream comedy careers – launching the likes of Tina Fey, Steve Carrell, Abbi Jacobson, Ilana Glazer, and Adam McKay, to name just a few – the idea that these theaters are tools for professionalization is a key point of tension within the community. The ability to individuate oneself and one’s career from the community of the theater, and from one’s improv troupe more specifically, is a central tension within improv theaters as they are currently structured. The goal of individuation suggests that both one’s motivations for embarking on an improv training program and a uniquely creative mind lie outside improv’s stated commitment to community. Previous generations of performers cast aspersions on those seeking to use improv training as a platform to grow a comedy career, believing that this new generation ignores the central tenets of their enterprise. As The Groundlings alumni Michaela Watkins has noted, her mentality as a teacher was, “be here because you want to be here and you want to learn improv. Not because you want this to be a stepping stone to Saturday Night Live” (Miller). Yet this mentality belies the fact that this generation did use improv as a stepping stone to Saturday Night Live and other film/TV projects. The tension between remaining within the community and betraying its ethos by using it as a stepping stone is imbricated with the institutional structure of improv theaters. As noted, there is a “graduation” implied with all of the major theaters’ course structures. Between Second City, iO, UCB, and The Groundlings, all follow the same basic structure in which students must start with an introductory course and move through several more courses, never skipping over one, until the courses run out and they may either audition for the stage teams at that theater or move on. The notion of the group as an independent unit is aligned with the teachings of improv, specifically those of its figureheads Del Close and Charna Halpern. In Truth in Comedy, Halpern describes “group mind,” framed as something only the best improvisers can achieve. “When a team of improvisers pays close attention to each other, hearing and remembering everything, and respecting all that they hear, a group mind forms,” Halpern writes. “The goal of this phenomenon is to connect the information created out of the group ideas…this is not to say that each person can read the others’ minds or project specific thoughts; but when a group mind is achieved, its members have a very strong sense of the group as an entity of its own, and connects with its feelings and requirements” (92). The value of the group over the individual is reiterated here, although this time Halpern vaunts it to such a degree that followed properly, it can produce an almost supernatural effect: one that is able to create art that, due to the inter-connectedness of the individuals, can only be attributed to the group as a whole. Given the importance placed upon the group, and the ability for the group to exist as its own creative ecosystem, one member’s leaving (or even the revelation of one member’s individual goals) can be viewed as a betrayal of both the group and the values for which improv purports to stand.

Other tenets first expounded upon by Halpern and Close are also utilized as justification for the idea that improv is about improving one’s life and art, not career. Namely, the “yes and” rule, in which performers must accept anything a team member introduces into a scene and then build upon it. This idea is not just put forth in Halpern and Close’s foundational text, but in many of the oral histories about the theaters: “yes, and” is not just conducive to a successful improv show, but helpful in everyday life. Performers have suggested it has provided a beneficial skill set in non-comedy jobs, in romantic relationships, in parenting, and more.

This approach to creative labor is hardly surprising in a neoliberal age that has systematized creative institutions and rendered them increasingly precarious even in an institutional structure. As Angela McRobbie explains, in creative industries a passion for the work is supposed to sustain the worker – instead of money, benefits, assurance of a job after training, and other stabilizing factors. And while improv’s centering of the community over the individual would seemingly contradict neoliberalism’s ethos, I believe that this valorization of the community is an aspect of the “romance” McRobbie argues is cloaking the dangerous state of precarity the in-training creative resides in. By arguing improv is about community above all else, improv theaters further distance themselves from the need to provide concrete value for the concrete expense of their classes. And framing certain practices as able to improve all aspects of life, such as “yes, and,” frees the theater from any responsibility to pay their performers or aid them in securing a job, as they argue for the less tangible benefits of enrolling in courses and performing.

Recent controversies have brought some of the problems within the improv community into the public eye, but without investigating the root cause of why these practices have been accepted, and even praised, those speaking for the theaters are able to easily re-frame the argument and hold off changes to the system. The improv theaters discussed have been responsible for producing exciting and novel comedy and comedians, but this only increases the need for its practices as an institution to be questioned and improved, rather than dismissed as long as performers love the art.