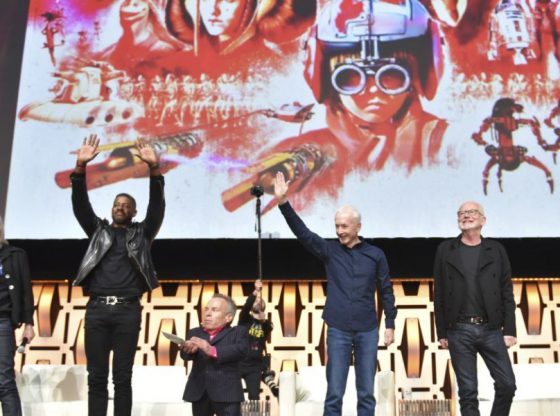 This year’s Star Wars Celebration did not try to explain midichlorians, but it did include plenty of behind-the-scenes looks, fond memories, and new merchandise related to one of the franchise’s more poorly received entries, George Lucas’s Episode I: The Phantom Menace (1999). From April 11 to 15, the official fan event, produced by Lucasfilm in collaboration with Reedpop and hosted in Chicago for the first time, positioned the film as a worthy franchise entry. Reminders of The Phantom Menace were common at Celebration, from exclusive Darth Maul-inspired hoodies and bomber jackets to panels about the film. Emphasizing its achievements in production design and visual effects and its connections to the ongoing franchise, Celebration recognized The Phantom Menace’s twentieth anniversary by elevating a curated, specific set of qualities, while predictably ignoring its broader reception from both critics and fans. Eschewing frequently criticized or controversial elements like racial stereotypes, poor performances, and a confusing plot, Star Wars Celebration’s careful commemoration of The Phantom Menace suggests an effort to rewrite the film’s legacy twenty years after its initial release and restore its value as part of the franchise. A Darth Maul jacket, this year’s most expensive Celebration-exclusive apparel item at $80.

Four panels at Star Wars Celebration focused on The Phantom Menace or used it as a case study for broader topics in the franchise. In a move that would seem odd for most film-related conversations, these panels avoided any sustained attention to the film’s plot or main characters, most notably young Anakin Skywalker. Beginning with the first day of panels on Friday, April 12, “The Music of Star Wars: The Phantom Menace with David Collins” analyzed John Williams’s accomplishments in writing an effective prequel score that contains subtle connections to the original film trilogy. Two panels on Sunday similarly underlined the film’s technical achievements. The “ILM Model Shop: Building a Galaxy” highlighted examples from The Phantom Menace for the film’s anniversary, revealing production secrets like the painted Q-tips used for the vast crowd in the miniature podracing set. And Lucasfilm’s Vice President and Executive Creative Director Doug Chiang recounted his work as the film’s design director, with sketches of unproduced ideas and behind-the-scenes photos of expansive miniatures. These sessions promoted music, design, and visual effects as elements of The Phantom Menace worth remembering, and the technical emphasis continued in the central event about the film. The ILM Model Shop panel, which highlighted examples from The Phantom Menace.

On Monday, the “Star Wars: The Phantom Menace 20th Anniversary Celebration” took place at the event’s largest venue, the Celebration Stage at the Wintrust Arena, which also hosted the panels for the franchise’s biggest upcoming projects, like (alleged) saga-ender The Rise of Skywalker and Disney Plus’s big-budget streaming series The Mandalorian. Despite the lighter crowd for Celebration’s programming on Monday, The Phantom Menace anniversary panel was livestreamed like the highest profile events of the weekend. The first half of the panel, moderated by Warwick Davis, featured the film’s “behind-the-scenes masters:” Doug Chiang, visual effects supervisor John Knoll, viewpaint supervisor Jean Bolte, and supervising sound editor Matthew Wood. Like the Friday and Sunday discussions, this portion of the panel focused on the design inspirations and challenges, with repeated attention to ideas of the film’s scale and ambition. Four cast members participated in the panel’s second half, and three of them are working on future Star Wars projects, stressing this film’s continuity with the ongoing franchise. Anthony Daniels will reprise his role as C-3PO in The Rise of Skywalker, Ray Park performed motion-capture for some Darth Maul scenes in the upcoming season of The Clone Wars, and Ian McDiarmid will, at the very least, lend his villainous Emperor laughter to The Rise of Skywalker. The last cast member to join the panel was Ahmed Best, who portrayed the Gungan character Jar Jar Binks. The much-maligned character is still used as fodder for derisive jokes, but this part of the conversation had a pronounced emphasis on the technical feat of creating the all-digital character, a perspective that was reiterated by a filmed message from George Lucas toward the end of the panel. Lucas praised Best’s performance, noting the difficulty of playing the character with the technology at the time.

By selectively highlighting design elements and the innovative technology used in the production, Star Wars Celebration’s commemoration of The Phantom Menace carefully sidestepped the negative perceptions of the film, in an apparent effort to restore its stature in and continuity with the ever-expanding franchise. Even in the limited discussion of Jar Jar, the twentieth anniversary panel remained firmly situated in Celebration’s commemoration of the film for its technical achievements, and the panel also reminded audiences of the film’s connections with future projects. It remains to be seen if Lucasfilm will undergo such an endeavor when the twentieth anniversary of Attack of the Clones arrives in just a few years, but the notable presence of The Phantom Menace at Star Wars Celebration offers an opportunity to consider how media companies continually attempt to direct the discourse around their properties, even with films that carry decades of critique and controversy.