“The boogeyman is outside”: Music as Presence in Halloween (1978)

Home /Video/“The boogeyman is outside”: Music as Presence in Halloween (1978) 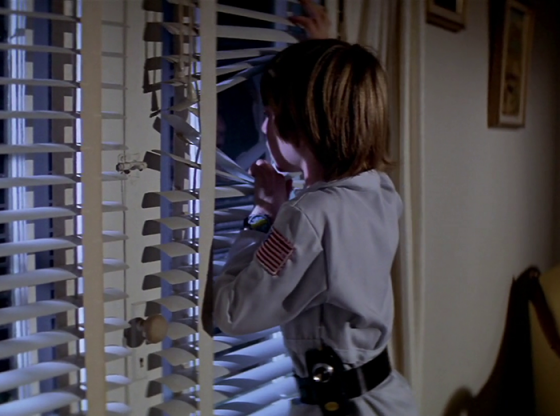 When we think of John Carpenter’s Halloween (1978), one of the first things that jumps to mind is the main theme that plays over the opening and closing credits. Composed in 5/4 time, this track is frenetic in its energy and menacing in its tone, the approximation of piano music via synthesizer enforcing the uncanniness of Michael Myers.

Despite this, “Halloween Theme – Main Title,” as it is designated in the score’s track list, only appears sporadically throughout the film. The track that viewers hear the most is “Michael Kills Judith.” Beginning with the high-pitched synthesizer that plays as the light goes out in a bedroom window, “Michael Kills Judith” accompanies the long POV shot that opens the film. It’s a meandering track that goes through multiple movements, including a slow plodding synth that conjures suspense and sudden, jarring blasts that rattle the viewer.

In this opening scene, the track scores the formation of Michael’s identity as a killer, associating itself with his weapon (the kitchen knife), his mask (a clown as a child, a non-descript Halloween mask as an adult), and his first murder. It is also linked to Michael in both the voyeuristic stalking of his victims and the consequences of his presence – most commonly death. Fittingly, these are the scenes in which the score is used throughout the film.

All of these different functions are combined once Laurie enters the house in which Michael has killed her friends. Opening a bedroom door reveals one dead body sprawled on the bed, and the track begins to play. As Laurie stumbles around the room in shock, two more bodies are revealed in different hiding spots, sending her out of the room. Pressed against a wall, the door to a pitch-black room open behind her, Laurie is unaware of Michael’s mask suddenly materializing in the darkness. As she begins to walk away, he slashes at her, and the music abruptly stops. In this one sequence, the track conveys and emphasizes Michael’s presence via his body count and unseen stalking of Laurie. It’s important to note that “Michael Kills Judith,” despite its name, does not play beyond the jarring synthesizer surge when Michael is shown killing someone. Even in the opening, Michael looks at his knife while stabbing his sister, not allowing the audience to see the kill. The track, then, is more concerned with the lead-up and aftermath of Michael’s presence.

The video above is comprised of footage from every scene in which “Michael Kills Judith” plays, including a few choice moments from the opening POV shot. This compilation of footage helps to reveal the connection between this specific track and Michael’s identity and presence.