Ignoring Edna’s Wishes: Looking Back at Pixar’s Technological History in The Incredibles 2

Home /Text/Ignoring Edna’s Wishes: Looking Back at Pixar’s Technological History in The Incredibles 2 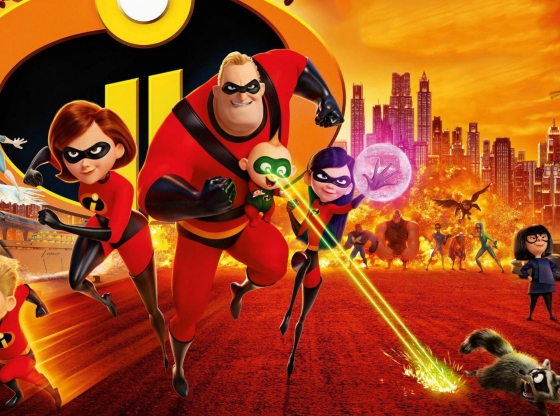 I typically stick to the advice of Edna Mode, the iconic super suit designer voiced by Brad Bird in his 2004 Pixar film The Incredibles. For example, I never wear capes. The bigger problem is, however, that Edna is a creative and I study film history. As a result, I frequently have to ignore one piece of her advice for professional reasons: Edna refuses to look back. For her, “it distracts from the now.” But looking back helps us appreciate her 2018 starring vehicle, The Incredibles 2 (also directed by Bird) even more. I therefore hope E will indulge me this time.

Ask any Incredibles 2 ticket holder where their super suit is, and you learn quickly that a good portion of the audience is already emotionally invested in this film. With that in mind, even the most enthusiastic audience may be more aware of the quotes or the characters than they are the technology behind these films. It can be very easy to forget that these beloved stories were generated by computers programmed by engineers. Without a degree in computer science, it is therefore hard to know what exactly changed in the 14 years between the two films. I suggest focusing on three things: water, hair, and lighting.

The technology side of Pixar chose to focus on each of these elements respectively in Finding Nemo (dir. Andrew Stanton, 2003), Brave (dir. Brenda Chapman and Mark Andrews, 2012), and Monsters University (dir. Dan Scanlon, 2013). Their work in each of these films means that there is a distinct difference between how each of these elements looks before these films came out and after. Rather than taking a teleological view that argues they look better now, I would simply say that these elements look more realistic now. In fact, one could also argue that the reason it so hard to know exactly where the technology has improved is due to the fact that the studio has always worked extremely well with what they have been given. They have done this by taking on stories and looks they know they can work with rather than working on movies out of their computers’ reach. They therefore waited to work with water until Finding Nemo just one year before The Incredibles. Once they were able to produce a manageable ocean for Nemo, they were able to provide an ocean for Elastigirl and the kids to crash into in the first Incredibles. The legacy continues into the sequel as they include superfluous water fixtures in the Parrs’ new house for comic effect and elaborate water sequences during the climactic yacht sequence.

Hair is even more complicated than water. It requires computer manipulation of thousands of strands in a way that matches the random way a real person’s scalp behaves. The studio had a breakthrough in Brave with the protagonist Merida’s unruly red locks. That was the culmination of a longer process of advancement with more complicated hair styles as the studio progressed. In the first Incredibles, you’ll see that Violet’s hair is always either pulled back or covering her face with all the strands functioning as one unit. It becomes a defining character trait, but also avoids any intermediate stage that would require more unruly behavior of the strands.

Finally, there is lighting. Lighting is a subtler device to look at because the studio has never been seriously hampered by their lighting abilities. Their films have always been well lit, and the technology’s immaturity is not as obvious as with other elements. Then in 2013 Pixar debuted the Global Illuminations Lighting System in both Monsters University and the short film released with it, The Blue Umbrella (dir. Saschka Unseld, 2013). The system enables computer generated light to bounce off surfaces in a photorealistic fashion. In Monsters University, you can see this in the way the seasons change on campus and in The Blue Umbrella, Unseld uses the system to play with your assumptions. The first shots of the film’s city look like live action photographs, which Unseld then proceeds to bring to life, revealing their animated origins. It is a significant technological achievement and in the later films, you can see a more photorealistic look and environments that change more readily due to atmosphere and time of day.

While all three of these elements come together in many of Incredibles 2’s larger set pieces, it is a smaller scene that really shows the changes in lighting and hair. In the middle of the film, Bob and the kids eat breakfast. The light pouring into the kitchen is soft and warm, indicating a sunny early morning. The lighting matches the happiness of the scene because Bob has figured out how to teach Dash math, which is the first triumph of his new stay-at-home mission. Violet, however, stands out as unhappy since the government has brainwashed her crush, Tony, to forget about her. Her darker clothes contrast with the lighting, but the eye is drawn to her terribly unkempt hair, which stands up in a large frizz. This is the opposite of her shiny, predictable locks from the first film.

The everyday nature of the image distracts from the technological development, however, so it is easy to take for granted. The key is that Bird is not using the new tech to wow us, but instead to tell a more relatable story. The hair foreshadows the rest of the scene as it turns from idyllic to comedic. Violet rages against her father and fails to destroy her super suit in a variety of spectacular ways. Bob’s and Dash’s confused amusement continues to match the otherwise peaceful environment before the kids leave for school. In the end, while the action scenes in the film are awe-inspiring, it is quiet scenes like this one that clearly demonstrate the studio’s and the medium’s comfortable maturity both in storytelling and in technology.