The Rhetoric of Malcolm X 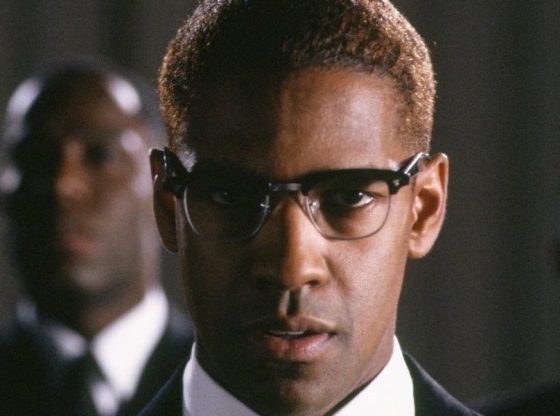 In 1992, Spike Lee’s biopic Malcolm X hit the theaters. Arguably Spike Lee’s best work, the film largely takes its inspiration from the book The Autobiography of Malcolm X, a collaboration between Malcolm X and Alex Haley (who completed and published the book after Malcolm’s death in 1963). Lee’s film stars Denzel Washington and features such black leaders as Bobby Seale, Reverend Al Sharpton, and Nelson Mandela. The film largely depends on Malcolm’s rhetoric to drive the story and appeal to the audience.

Obviously, Malcolm X’s rhetoric features heavily in the film. Some of Malcolm’s most famous techniques appear, including his use of chiasmus, the use of words and phrases in reverse order, to underscore the broken reality that is a black person’s life in the United States. Some examples of Malcolm’s use of chiasmus include, “You end up hating your friends and loving your enemies,” “People accept wrong as right and reject right as wrong,” and “People actually think that the criminal is the victim and the victim is the criminal.”

An example of Malcolm’s rhetorical technique.

One moment of the film includes Malcolm’s most famous use of this technique, his declaration that, “we didn’t land on Plymouth Rock. Plymouth Rock landed on us!” This phrase intends to illustrate how white people “conquered” America and took it over of their own accord while, for black people, they were forced to come to America and were subjected to horrors by white people. Therefore, Plymouth Rock “landing” on them represents this subjection.

Another key element of Malcolm’s rhetoric that appears in the film is his use of the slave dichotomy. In the film, this occurs in a television segment where Malcolm is arguing his platform against another black man who calls him an extremist. Malcolm explains that, at the time of slavery, there were two types of slaves: the house slave and the field slave.

Malcolm’s explanation of the difference between field and house slaves.

Although this is patently false (there was no such distinction between slaves at the time), the rhetoric allows Malcolm to explain the difference between his platform and “less aggressive” black movements, such as Martin Luther King Jr.’s rhetoric of nonviolence. In the film, it also allows him to dismiss the other black man accusing him of extremism as a house slave, or a black man that has a slightly nicer life than the regular black man and, therefore, sees no need to take radical action. In the end, it does not necessarily matter that the story of the two types of slaves is false, only that the story subverts the rhetoric of any black person who labels Malcolm X as too extreme.

Much of Malcolm X’s rhetoric uses a similar style, combining storytelling with a historical spin and logic. In the film, Lee underlines Malcolm’s use of logic through his argument with the prison priest. When the priest is sharing teachings from the Bible and asks the prisoners for questions, Malcolm takes the opportunity to question the priest on how he knows the ethnicity of any of the apostles and, when the priest acquiesces that they do not know for sure, Malcolm pushes the argument further from the apostles to Jesus. The priest tries to argue back that Jesus (and God) are clearly white by pointing to the artwork around the room which depict Jesus as a white man. Malcolm points out the major flaw in this argument, that each of these pieces of art were made by white men to perpetuate the power of whites through the myth of a white Jesus. Malcolm pushes the argument further, pointing out that there is evidence in the Bible that Jesus is not white, including the description of Jesus’ hair being like wool.

Malcolm’s argument for a black Jesus illustrates his platform’s strong connection to Garveyism. Although he was preaching the message of Elijah Muhammad at the time, there are multiple connections to Garveyism in Malcolm’s rhetoric. In addition to the idea of a black Jesus and God, Malcolm’s rhetoric emphasizes a separation between blacks and whites and focuses on a need for black empowerment. In the film, one of Malcolm’s speeches emphasizes the idea that black people must separate themselves from the mental colonialism to which they have been subjected. This concept of mental colonialism, the idea that black people value themselves less and subject themselves to horrible treatments to make themselves look more white, is also found in Garveyism. Marcus Garvey heavily criticized black papers that advertised hair straightening and skin whitening treatments as undermining the black cause. (For a different, but similar illustration of this issue, see Netflix’s Nappily Ever After).

Although the Garveyism present in Malcolm X’s rhetoric was largely paralleled in the teachings of Elijah Muhammad, it is important to note that Malcolm’s father was a proud black preacher who was a firm believer in Garveyism. Even though Malcolm’s father was killed, most likely by white men, when Malcolm was still a child, he speaks in his autobiography on how his father used to favor him over his siblings. This favoritism and Malcolm’s experiences with his father before his death may have strengthened the Garveyist aspects of his rhetoric. At the same time, the Garveyist elements of Elijah Muhammad’s rhetoric may have made the Muslim faith all the more appealing to Malcolm, who would have been predisposed to find agreement in a rhetoric similar to that of his father.

Finally, it should be noted that there are two main chapters to Malcolm X as a rhetorical leader. In the first chapter, his rhetoric is clearly anti-white. He speaks of all white men as evil and preaches a total separation of the races. However, after becoming disenchanted with Elijah Muhammad, Malcolm takes a trip to Mecca and experiences a turning point in his outlook. As stated in the film (and Malcolm’s autobiography), in Mecca Malcolm X worshipped next to people of all races in harmony. White or black, they were all present to honor Allah and were able to coexist harmoniously. After his trip to Mecca, Malcolm’s words become decidedly less anti-white and more pro-black. He does not shy away from his call to arms in defense, but he no longer labels all white people as evil and is more willing to entertain the idea that the races can cohabitate peacefully one day.

In his speech, The Ballot or the Bullet, a speech not referenced directly in the film by name but still present, Malcolm X speaks of moving beyond a fight for civil rights in America. He talks about taking the grievances of the black American to the United Nations to make a plea for human rights. In this way, Malcolm showed his subversion and intelligence. While other race leaders were willing to work inside the system to gain black people civil rights, Malcolm subverted the system. In his opinion, the white leaders of America needed to be held accountable for their racist actions which, according to Malcolm, denied blacks their human rights. Malcolm’s view on progress and the eradication of slavery in the U.S.

By stating he would go to the United Nations to argue outside of America for his equality, Malcolm X elevates his rhetoric from the mire of American hegemony to a place where his cries of injustice might be heard and, what’s more, answered. Unfortunately, Malcolm’s assassination in 1965, by three members of the Nation of Islam, his former organization led by Elijah Muhammad, put a stop to Malcolm’s rhetoric and struggle towards Afro-American equality. Instead of the U.N. declaring in 1965 that the U.S. should be held accountable for racism, a U.N. affiliated organization found in 2016 that the U.S. owes reparations to its black citizens for the many injustices they have faced, going back to (and as a result of) slavery.

At the end of the film, Malcolm X’s life and rhetoric is being taught in classrooms and there is a sequence where several young black girls and boys stand up individually to shout, “I am Malcolm X!” By using mirroring, paralleling the education of these boys and girls with Malcolm X’s own, Lee is able to show how Malcolm’s life and rhetoric has improved the outlook for black people, if only as a way to begin the decoupling of mental colonialism and move towards black pride.