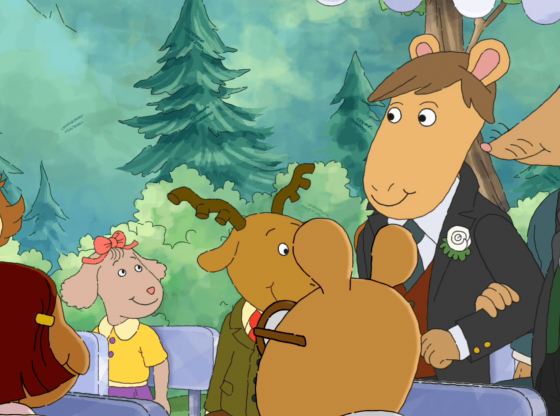 In the 22nd season premiere of the world’s most famous animated aardvark children’s TV show, Arthur’s teacher, Mr. Ratburn, married a man (well, technically, an aardvark, but a dude aardvark).

The internet exploded with queer joy; posts and articles and art abound (seriously, there’s a lot of fanart, and it’s all adorable). The event also sparked far-right rage, to the point that Alabama Public Television refused to air the episode (though an Alabama church organized a free public showing of the episode in response). Fanart of Mr. Ratburn and his husband dancing at their wedding, by dottyboxx on Tumblr.

The fury of homophobes is enough to indicate the importance and impact of this episode, as is the widespread queer celebration of a new icon to add to the gay TV firmament. Beyond just criticism or celebration, however, this animated gay rat allows us to explore in greater detail a few dimensions of queer representation on television. Specifically, the particulars of this character, episode, and television series showcase queer representation that sidesteps tokenism, pointedly rebukes stereotypes, and employs humor that involves queerness but doesn’t come at the expense of queer characters.

Increasing diversity on television can take the form of tokenism, wherein the show brings on a “diverse” character whose gender, race, sexuality, ability, etc. differs from the majority of the cast, in order to gain social kudos or use that character as a reason to discuss diversity issues, often to the detriment of their characterization. Arthur largely avoids this, as Mr. Ratburn is not a disposable character, nor is his big gay wedding merely a time for straight characters to demonstrate their allyship or to illustrate a preachy lesson about acceptance. Of particular interest is the show’s choice to reveal the queerness of a classic Arthur character, rather than bring in a new character to fulfill a queerness quota. It’s easy to imagine a different choice in which, say, Arthur gets new neighbors who happen to be a gay married couple. Arthur and his family could meet them, the message that ‘they’re just like us!’ could be delivered, and the show could move on, never to see the gay neighbors again. However, as a series regular, viewers have a pre-existing affective attachment to Mr. Ratburn, making his newly apparent queerness more emotionally and narratively significant. In queering such a long-standing character, the show informs its viewers that they can take gay Mr. Ratburn into their hearts, or they can leave. He’ll still be here next week. Beyond being a regular character, it’s important that Arthur chose to make its first central queer character an out elementary school teacher. In a world where workplace protections for LGBTQ+ folks are in question and teachers in particular continue to face homophobic backlash, having Mr. Ratburn’s queerness be both public and matter-of-fact normalizes gay teachers for Arthur’s young audience as well as their parents, disrupting noxious homophobic stereotypes about gay men as dangers to children. And on a lighter note, although some queer fans playfully suggest that no straight man could pull off a look like this, Mr. Ratburn isn’t trapped by restrictive stereotypes around what gestures, style of dress, or manner of speech gay folks are supposed to have.

Finally, the episode doesn’t lose an iota of the show’s trademark humor in its pursuit of queer nuptials, nor does it make a joke of its gay characters. In fact, the humor of the episode relies on flipping the heteronormative script. In something of a twist on “queerbaiting,” the episode “straight-baits” its audience, following Arthur and his friends as they assume Mr. Ratburn is getting married to a sharp-spoken, hyper-strict woman named Patty (voiced by noted lesbian actress Jane Lynch). It’s not until the final wedding scene that the kids realize Patty is Mr. Ratburn’s sister, and it’s revealed with a cheeky wink that Mr. Ratburn’s spouse-to-be is actually the friendly gentleman chocolatier they met earlier in the episode. The kids are thrilled at this twist, and the wedding proceeds without a hitch. The final joke of the episode doesn’t rest on gender or queerness, but with an Arthur-typical joke about how teachers shouldn’t dance. Mr. Ratburn’s sexuality is of little consequence to the kids, who care far more about his identity as a teacher who is wont to give pop quizzes on the difference between lichens and liverworts. Through incorporating queer humor into traditional children’s show hijinks, Arthur strikes a balance wherein queer characters’ identities are neither erased nor serve as their sole, defining characteristic.

As various denizens of the internet point out, Arthur did more for positive queer representation in this twelve-minute episode than media-monoliths like Disney or its subsidiary Marvel have in decades (sorry, Gay Joe Russo). Although Arthur is not the first children’s show to incorporate queer characters and themes, it is the first on PBS, and helps course-correct from an incident in 2005 when the service pulled an episode of the Arthur spin-off Postcards from Buster that featured a lesbian couple. Further, by queering a regular character, Mr. Ratburn and the Special Someone ensured that this gay representation will continue into future seasons, as well as cast a rainbow sheen on all the character’s past appearances. Looking closely at the specifics of this popular case of incorporating queer representation allows us to pinpoint successful elements of narrative and characterization and accordingly adjust our expectations and demands for more, and better queer representation in all kinds of media.