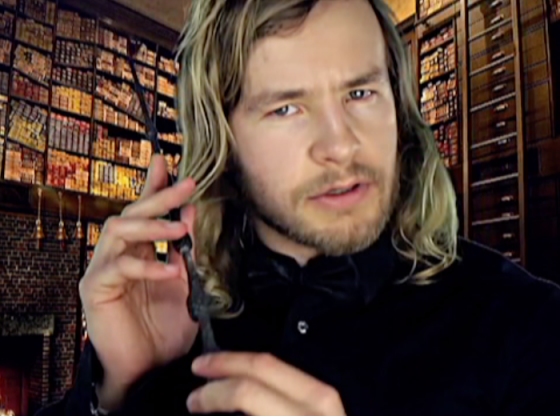 This video reflection focuses on a community of YouTube creators who leverage the affective affordances of relaxation videos (ASMR) in an ongoing effort to process, deform, and re-present mainstream media texts. Though ASMR is an incredibly broad genre, comprised of about 11 million videos to date on YouTube alone and a wealth of subgenres, I highlight just one those subgenres here – soothing roleplays of licensed media characters. This unique ASMR approach quietly reconfigures texts, properties, and franchises, traversing platforms and time to locate (and creatively reproduce) relaxing “triggers” wherever they may exist. In order to bring this partnership between ASMR and mainstream media to life, I juxtapose clips of films and television episodes with their corresponding re-interpretive roleplays; some clips are intercut, where possible, with ASMR performances which roughly correspond to the dialogue and plot of the canonical text.

Though it’s a lot of fun simply to see our favorite characters “translated” into relaxation/meditation mode, I’m also interested in starting a conversation about ASMR itself as a model of spectatorship. And even beyond that, it’s a re-thinking of what spectatorship can actually be: a experiment in textual processing, a performance of fandom that recognizes media texts not as intellectual exercises, but as comfort objects. The video has two aims: 1) to highlight which media texts are primed for spectatorial transgression by way they engage sensation, and 2) to show that ASMRtistry makes a really valuable contributation to audience studies. These manipulations of texts represent (by way of Stuart Hall) dominant, oppositional, and negotiated processing through audiovisual style. Compare, for example, the two interpretations of the character Negan from The Walking Dead: one ASMRtist adopts a nearly identical haircut and outfit, aligning his impression to the canonical actor’s performance; the other ASMRtist parodies the character, softening his verbal delivery and changing the casing on Negan’s murder weapon (a barbed-wire baseball bat) to non-threatening bubble wrap. Another ASMRtist, inspired by Twin Peaks’ Log Lady, builds her roleplay around the character’s intimacy with an inanimate object, simply stroking a log without speaking for several long minutes; it’s a purely sonic commentary on the Log Lady’s persona and narrative function, accomplished without words.

Examples such as these help us think about how ASMRtists often engage with longstanding processes of fandom such as cosplay and transformative works. The clips I chose (though of course limited by time and my rudimentary video editing skills) show the great depth and variety of costuming, performance, and special effects that attend these instances of processing. Look no further than ASMR Voldemort, who gamely performs in full makeup in a smoky home studio, or ASMR Linda Belcher, who edits herself into the animated world of Bob’s Burgers and softens Linda’s vocal delivery into a soothing hum. Many of these roleplayers share the same audiovisual strategies when it comes to re-thinking canon as relaxation media: heightened sonic attention to tactile surfaces, space, and the textures of the voice; smoother and more exaggerated bodily gestures and prolonged eye contact; changes in color and focus to produce darker, dreamier, or softer scenes; and so on. They highlight the aspects of mainstream texts that act as “feeling forms,” sparking an uncanny and sweet affect that we audiences can’t help but chase.

Through their art, ASMRtists explore the textual interpellation of fans, the constant grapple for power over the text between audiences and creators, and of course, the question of a text’s “best uses” or “best practices” for exhibition. Who’s to say we can’t fall asleep to Linda’s nasal, honking voice when it’s tempered just right? Indeed, I suggest that ASMR roleplays of this nature are a two-way street, starting conversations not only around the ineffable appeal of TV and film, but also how we rely on sensation for that fannish slide into deep textual investment and comfort-based rewatching.

PRODUCTION NOTES: Although ASMR content has gained massive traction online in the last few years, viewers may not be familiar with this genre of video or its intended effects; to this end, the video begins with a short introduction to what ASMR is and what it stands for (Autonomous Sensory Meridian Response). ASMR is simply another way to describes the body of physical and emotional affects known as “tingles,” which the majority of humans experience as “chills” or a relaxed feeling as a result of deep repose, safety, caretaking, sleepiness, and/or meditative stillness. ASMR, as I demonstrate with these clips, is not only a way to make videos, but also refers to the feeling provoked by them; particularly for those viewers unfamiliar with the genre, the essay might illustrate that they are not, in fact, unfamiliar with the sensation. Underneath this introduction, I laid an audio track borrowed from a mermaid roleplay by ASMRtist Goodnight Moon, which demonstrates the strategic layering and mixing of calming sounds such as whispers, taps, and fabric susurrations; the track bookends the video to invoke the sense of spatial travel, disembodiment, and thick atmosphere that attends all ASMR content.

My methodology for choosing and organizing the clips fell along two lines: triggers and categories of interpretation. Firstly, I chose roleplays which contain what I hope is a good variety of common ASMR triggers, from personal attention (Edward Scissorhands/“Edgar Scissorhands”) to eating (Matilda/“Matilda Chocolate Cake”) to accents (Bob’s Burgers/“Linda roleplay”). I did so not only to provide a wide portal of access to new ASMR initiates, but also to demonstrate ASMR’s infinite potential to magnify any number of textual aspects; this diversity of approaches to “relaxifying” existing media content newly exposes filmic and televisual texts as audiovisual and affective prisms, polysemic not only in terms of meaning but feeling as well. I isolated clips that were between about 5-10 seconds in length in order to make room for this variety (and avoid the discomfort for some viewers that might attend ASMR’s characteristic long silences).

Secondly, I selected roleplays that were strong examples of dominant interpretation/processing (i.e. the faithfully miniaturized Spirited Away breakfast cook with identical sounds) as well as negotiated (Log Lady) and oppositional (Harry Potter’s kind Mr. Ollivander as a “Rude English Gentleman”). These varieties of approaches showcase how ASMRtistry, like any mode of media reception, can venerate, celebrate, disagree with, parody and reject texts (as well as exist concurrently in any of these positionalities). For example, the Bob’s Burgers roleplay playfully re-frames a canonically grating character as a nurturing and meditative presence; the roleplay is designed to delight fans of the original text with its creativity in recuperating loudness, energy, and stress for ASMR purposes. I generally tried to mix all three of these interpretive approaches throughout the video, demonstrating how ASMRtists not only target “appropriate” texts but also take on “inappropriate” texts as an artistic challenge.