This Is Not a Puzzle: The MIT Mystery Hunt

Home /Text/This Is Not a Puzzle: The MIT Mystery Hunt 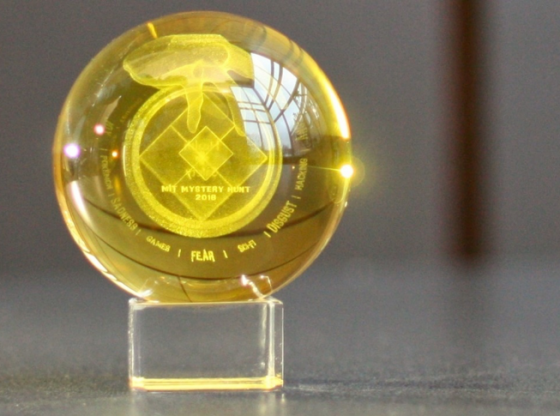 Earlier today, hundreds of puzzle enthusiasts from around the world gathered on the MIT campus to compete in the fortieth annual MIT Mystery Hunt, a sleepless weekend of obscure, intricate, lovingly designed brain-twisters that will draw variously on wordplay, trivia, lateral thinking, and logic in ways that are purposefully left unexplained.[1]

Shortly after noon, participating teams of puzzlers received access to a website with an initial set of puzzles. Solving these puzzles will reveal more sets of puzzles, which when solved will reveal more sets of puzzles (and so on) until the solutions to said puzzles combine in meta-puzzles, the solutions to which combine in meta-meta-puzzles that build ultimately up to a climactic scavenger hunt (known as the final “runaround”) for the Hunt’s particular quarry: “the Coin.”[2] It is an event fueled by takeout, caffeine, and the particular flavor of adrenaline that courses through your bloodstream when you’re trying to solve seemingly endless puzzles as quickly as you can (and maybe more quickly than any other team). And the prize for finding the Coin first? Designing and running the next year’s Mystery Hunt.

Winning Mystery Hunt thus confers both substantial bragging rights and substantial obligation on the victors. In addition to designing more than a hundred puzzles and creating a website to host them, the teams running Mystery Hunt frequently incorporate short films, live and audio-recorded musical performances, original art, and hand-made physical elements, etc., into their puzzles. Several Hunts have featured puzzles with fully playable text adventures.[3] Each puzzle requires play-testing, preferably by multiple play-testers, to ensure that none are too easy or too impossibly obscure. Then there’s the work that goes into running the Hunt as it happens: coordinating spaces for team HQs and events, running said events at all hours of the day and night, and keeping the Hunt website up-to-date as dozens of different teams continually complete and unlock new puzzles. Puzzle solutions are submitted through the Hunt website but are traditionally confirmed as correct or incorrect by phone call, which means that the team running the Hunt needs people monitoring submitted answers and working the phones continuously for the three-day weekend. Above and beyond these duties is the overarching obligation for the team running Mystery Hunt to make sure the Hunt is “fun,” an all-consuming pressure that is at least partially responsible for the Hunt’s ever-increasing scope, artful execution, and complexity. Hunters gathered for the kick-off ceremony at the 2011 MIT Mystery Hunt.

All of which is to say that the MIT Mystery Hunt is a collaborative work of art, with plenty of emphasis on the work. Teams running the Hunt take on this work and this pressure without payment, a fact that would conventionally classify their efforts as “unpaid labor.” As media scholars have argued, unpaid labor is not inherently problematic.[4] Still, marking labor as “unpaid” has a tendency to highlight its unfulfilled potential for payment (i.e., there are two kinds of labor: paid and unpaid), and hence “unpaid” has been typically applied to labor that goes unpaid in ways that are exploitative.

However, Hunters do not fit cleanly into prevailing theories of consumer labor that foreground capitalist exploitation and the collection of data to facilitate said exploitation.[5] Capitalist consumption is largely incidental to Mystery Hunt; the “free lunch” that Hunters consume in the form of puzzles is, aside from the work thrust onto the winning team, given without a catch.[6] Most of the Hunt’s physical attendees take advantage of MIT’s free Wi-Fi network, many of the go-to sites for Hunters (Wikipedia, online anagram solvers, etc.) are non-profit, and Google’s analytics are presumably confounded by participants’ overnight obsession with, e.g., the names of the animated characters in an Australian PSA campaign to promote railway safety.[7] This is not to say that no one profits from Mystery Hunt—airlines and delivery food services perhaps see a bump in their earnings, and MIT no doubt uses the Hunt as a recruitment tool—but, by and large, Hunters are consuming puzzles and working tirelessly to sustain only Mystery Hunt itself as a self-reproducing media object.

Neither are Hunters focusing their labor on the sort of commercial media object that dominates fan scholarship. Hunters do regularly engage in fannish behavior: puzzles and even entire Hunts are often thematically tied to commercial fan objects.[8] However, Hunts are equally prone to draw on and explicitly reference the culture and history of Mystery Hunt itself, as well as the history of MIT and Boston.[9] In other words, the puzzles of Mystery Hunt are not just a medium for fan practices but are also objects of fandom in and of themselves. Hunters are thus a strange breed of laborers, participants in a sharing economy[10] that demands the greatest contributions from those who earn in a weekend the privilege of working even harder in the following year. As the Hunts regularly test the engagement of Hunters with the institutional history of Mystery Hunt, the ability to win and hence participate in the creation of the Hunt is dependent upon one’s proven fandom of the same.

Still, anyone can create a team or even register as an “Unattached Hunter” to be added to a team that has indicated a willingness to take on such free agents. Similarly, while physical attendance at the Hunt is necessary to find the Coin (and so to win), many teams are comprised of both physical attendees and remote Hunters. I’ll be one such remote participant, puzzling from Madison for the Raucous Raucous Rhinos. As our team is relatively small, I can say with some assurance that we will not win and with even more assurance that we could not afford to do so. Do not wish us luck.

[1] If this sort of thing sounds interesting to you, the previous Mystery Hunts going back to the inaugural 1981 Hunt have been archived here.

[2] Which is a coin typically, although Coins in previous years have been paperweights, laser-engraved cubes, parts of meteorites, and realistically forged MIT diplomas. A gallery of past Coins is available here.

[3] My personal favorite is The Lurking Horror II: The Lurkening, created by Ryan Veeder for the 2018 Hunt, which forces players to die repeatedly, Edge of Tomorrow-style, in order to accumulate the puzzle solution from past failures. Several other text adventure puzzles from previous Mystery Hunts are available here.

[5] The Hunt is officially an MIT Association of Student Activities (ASA) group, which means that it receives some funding from the MIT Financial Board (Finboard); the Hunt also accepts donations. The Mystery Hunt student organization website claims that the Hunt also has corporate donors, but, in more than a decade of participation, I’ve yet to see an advertisement.

[6] Scholars have described free media (e.g., broadcast television) as a kind of “free lunch”: a means to get consumers in the door so that the real business of advertising can take place. See, Mark Andrejevic (2014), “‘Free Lunch’ in the Digital Era: Organization in the New Content.”

[7] The campaign, called Dumb Ways To Die, features animated characters dying in strange and gruesome ways. The Hunt puzzle in which the campaign was featured is (Mystery Hunt archives spoiler) Safety Training, created for the 2019 Hunt by Guy Jacobson.

[9] A convention of which the apotheosis was the 2010 Mystery Hunt, for which the theme was an alternate history of MIT in honor of Mystery Hunt’s (roughly) thirtieth anniversary.

[10] Lawrence Lessig (2008) distinguishes between commercial economies and sharing economies (and hybrids), in his book Remix: Making Art and Commerce Thrive in the Hybrid Economy.